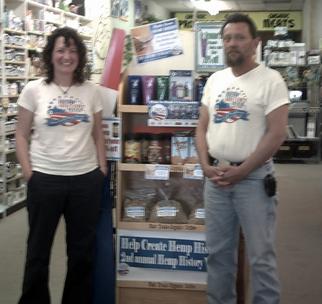 It is time for Federal policy on industrial hemp to reflect today's reality and ensure a better tomorrow for America's families and farmers, the economy and our planet.

Join natural products pioneers, leading retail stores, health and wellness advocates and citizens across the nation in celebrating Hemp: Our Heritage, Our Future.

​And with your help buying, sharing and spreading the word of the new items featured in our All Things Hemp Section of the store ~ History is being made! 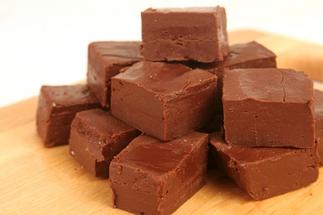 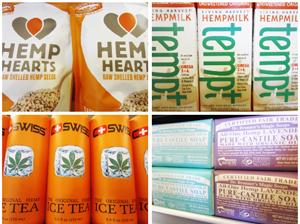 Hemp History
Industrial Hemp has played an important part in the American History.  Did you know that in the 1700s farmers were required by law to grow hemp in Virginia and other colonies?  During World War II the US government encouraged farmers to grow industrial hemp and even produced a film for them called Hemp for Victory.  Hemp was planted across the Midwest, including in Indiana.  Hemp was used for a number of things including canvas and cloth, lighting oil, paper, and rope.  It was an invaluable crop for hundreds of years in the US, and thousands of years around the world.

In the 1930s came the fight against marijuana and the Marijuana Tax Act.  While industrial hemp and marijuana are different plants, there was never a clarification.  Also, plastic fibers were replacing natural fibers in the marketplace.  The combination was a successful push of industrial hemp cultivation out of US agriculture.

Why Hemp History Week and the support of industrial hemp farming?

Hemp is SUSTAINABLE, NUTRITIOUS, and VERSITILE.

Similar to flax, hemp provides raw materials for both food and fiber.  It is an environmentally sustainable input for potentially thousands of products raning from food and body care to plastics, paper, textiles, building materials, and even ethanol.

It is important to note that hemp has no drug value.  Hemp seed contains little to no measurable amount of tetrahydrocannabinol (THC), the primary psycoactive ingredient in drug varieties of Cannabis. Using hemp products will not cause a false positive drug test.

Hemp History Week is a national, grassroots education campaign designed to renew strong support for industrial hemp farming in the US.


Foods made from hemp seeds have become a staple in stores across the country.  The light, nutty flavor of hemp seeds (similar in taste to toasted pine nuts) makes them a perfect raw ingredient for delicious breads, cereals, waffles, nut butters, snacks, protein powders, nutritional oils, and even non-dairy beverages and frozen desserts.

Hemp seeds are a nearly-perfect food source.  High in digestible protein, healthy omega essential fatty acids (EFAs) and naturally-occurring vitamins & minerals, hemp seeds are also free of gluten and other common allergens, such as those found in soy, dairy, peanuts, and tree-nuts.

Nutrition and medical experts agree that including EFAs (the 'good' fats) in our diet can have important health benefits, including improved heart health, brain function (especially in children), skin condition and immune function.  However, as our bodies do not produce EFAs, we must obtain them through our food.

Additionally, hemp oil's omega-3 EFAs and vitamin E content make it an ideal ingredient for body care products.  The EFAs soothe and restore skin in salves and creams and give excellent emolliency and a smooth after-feel to lotions, lip balms, conditioners, shampoos, and soaps.

While you can sprinkle hemp seeds on a salad or oatmeal, or add to a smoothie, here's a fun, yummy way to get some hemp into your diet!

Drain the raisins, keeping some of the liquid.

Mix the raisins and tahini together in a bowl and stir to combine with a rubber spatula.  Scoop into a food processor and process until it's a smooth paste.  You may need to scrape down sides to combine well.  Add some raisin water 1 tablespoon at a time if mixture is too thick.

Combine the paste and remaining ingredients in a large mixing bowl.  Press mixture into a 9-inch bread or casserole pan.  Refrigerate the pan for 10-15 minutes.  Remove pan and cut the fudge into pieces and serve.

Hemp in Our History

Industrial hemp has served humanity well for centuries.  THe first paper in China was pulped

rags.  The paintings of Rembrandt and Van Gogh were usually painted on hemp canvas

(the word canvas itself derived from Cannabis) and used hemp oil based paints.

In America, hemp was so important to the infant colonies that Jamestown passed our first

and Connecticut in 1632).  Thomas Jefferson and George Washington were hemp farmers

and advocates of growing hemp 'for the economic necessity of the state.'  The USS

Constitution was equipped with 60 tons of hemp rope and ship sails' the majority of all twine,

rope, ship sails, rigging, and nets up to the late 19th century were made from hemp.

Throughout the centuries, hemp was regulated as any other farm crop; the United States

in order to help American farmers understand the best ways to grow industrial hemp.Even after hemp was banned, the USDA briefly brought it back during WWII with the Hemp for Victory campaign.

American history is intertwined with industrial hemp farming and evidence is ample.  There are towns called Hempfield and Hempstead.  There are newspaper articles from 150 years ago that talk about hemp as frankly as they would corn.  Wild hemp, or ditchweed, acts as a physical reminder of the land's roots.

Timeline
1700s - American farmers are required by law to grow hemp in Virginia and other colonies.
1760 - The Declaration of Independence is drafted on hemp paper.
1797 - The USS Constitution is rigged with 60 tons of hemp sails and rigging.
1790s - George Washington, Thomas Jefferson, and John Adams, our founding fathers, grow hemp and extol its benefits.
1840 - Abraham Lincoln uses hemp seed oil to fuel his household lamps.
1916 - USDA Bulletin No. 404 shows that hemp produces four times more paper per acre than do trees.
1938 - Popular Mechanics article 'New Billion Dollar Crop' explains that new developments in processing technology could use hemp to manufacture over 25,000 different products, 'from cellophane to dynamite.'
1942 - Henry Ford builds an experimental car body ake with hemp fiber, which is ten times stronger than steel.
1942-1946 - American farmers from Kentucky to Maine to Wisconsin to Oregon harvest over 150, 000 acres of hemp through the USDAs Hemp for Victory program.
1957 - Hemp is last grown in the US due to government confusion over hemp and drug varieties of the plant, while new government incentives for industry replace natural fibers with plastics, ultimately bankrupting key hemp processors.
1998 - The US begins to import food-grade hemp seed and oil.
2004 - Ninth Circuit Court decision in Hemp Industries Association vs. DEA permanantely protects sales of hemp foods and body care products in the US.
2005 - A bill is introducts in the US congress for the first time to allow states to regulate hemp farming, but no vote has taken place to date.
2007 - The first hemp licenses in over 50 years are granted to two North Dakota farmers.
2000-2010 - New processing technologies arise to commercialize 'cottonized' hemp, hemp concrete and high-tech hemp composites for the auto industry.


Good for Our Farmers and Our Environment

Hemp fiber is one of the strongest natural fibers on earth.  Hemp also offers greater breathability than cotton, a crop which accounts for nearly 25% of pesticide use.  Hemp can be grown without any pesticides of agricultural chemicals and is a non-toxic source of fiber for clothing that is gaining popularity among leading fashion designers.  The strength of hemp fiber makes it a favorite for specialty paper, popular in today's ecologically-conscious marketplace.  Paper pulp made from hemp hurds (the woody core fiber) is superior to short-fiber wood pulp and is an ideal additive to strengthen recycled post-consumer waste (PCW) pulp, thus expanding PCWs use.

Industrial hemp is also good for the farmers.  Currently, more than thirty nations grow industrial hemp, and the US is the largest consumer of hemp products.  Knowing where our food comes from and how it is processed has never been more important to consumers.  Since hemp can be grown organically and aids in weed suppression and soil building, it is a favored rotation crop for farmers where it's grown.  Plus, currently in Canada, hemp farmers net $200-250 an acre in profit.  With domestic hemp industry expanding rapidly and sustainable, US farmers want an opportunity to grow this crop again, and US manufacturers want a domestic supply of hemp raw materials.